Over the weekend I traveled to Boston for the second annual Festival of Indie Games hosted by MIT. After receiving a boost from Kickstarter, this year’s Boston FIG nearly doubled in size from the previous year, featuring a full day of parallel speaking schedules, an art gallery, a concert series, and an entire gymnasium full of independent games from Boston and beyond. As I obtained my passes–an unnecessarily arduous process and the festival’s only obvious growing pains–I frequently heard fellow attendees excitedly exclaim that it was “just like PAX!” Indeed, given the recent resurgence of the dickwolves controversy at PAX Prime, it seems that Boston FIG is shaping up to be a great alternative for both fans and independent developers. I was pleasantly surprised by not only the number of games on display, but by how diverse the showing was in terms of both the kinds of games and who was developing them. Below are three of what turned out to be many games I played Saturday morning. More will be highlighted tomorrow. 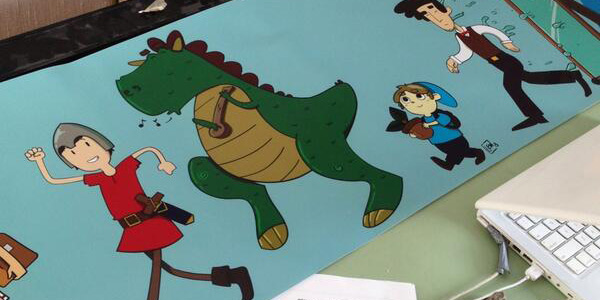 Route 28 is a relatively new developer based outside of Montreal that is working on adorable point-and-click adventure games.  The game I saw demoed cast the players as an agent who must use his five senses to understand his clients. Players did so by clicking on objects on the screen, at which point a menu would appear urging them to select one of their senses (sight, smell, taste, touch, and hearing). Choosing the most useful of the senses would provide players with textual information about the space, or it might even cause the environment to change and spur forth a solution to the puzzle. I spoke with both lead writer Marie and coder/artist Louis who explained that their aim was to develop episodic adventures starring the characters seen in their booth’s banner, seen above from Louis’s twitter account. Some of the characters featured in the banner did not even have fully developed stories or games attached to them yet, but each is already brimming with personality. You can learn more at Route 28’s website, route28.ca.

Third Eye Crime is a puzzle game for the iPad from Moonshot Games. It tasks the player with guiding a psychic art thief through his heists by drawing a path ahead of him with his or her finger. I found this to be exceptionally responsive on the iPad, with my gestures accurately represented on screen by a sharp blue line. The challenge comes with the use of the thief’s aforementioned third eye. Like many stealth games, the sightlines of the guards are represented graphically with a colorful triangle, and because our hero pyschic, he can also see where the guards think he will be, represented in red. The player must use this information to stay one step ahead of the guards, who become more numerous and trickier to evade as the game progresses. This is all wrapped up in a slick, Dick Tracey-esque aesthetic–noir drawn in bold lines with bright, primary colors–and punctuated by comic book-like cinematic sequences that bring the player up to speed on the story. Third Eye Crime already looks like a polished product and is due out early next year. Trailers and more screen captures are available on Third Eye Crime’s official website.

The first thing that struck me about High Strangeness was the glitch art-like aesthetic as the pixels seemed to mutate and change sporadically, reminding me of the Japanese horror game, Nanashi No Geemu. However, Barnyard Intelligence Games’ owner and lead developer Ben Shostak assured me that it was not a horror game. Instead, the glitch-y appearance was the byproduct of the game’s biggest selling point: the “12-bit adventure game” tasks players with switching between 16 and 8 bit graphics. The change is more than one of aesthetics, switching between the look of each console generation means switching between the movement patterns and capabilities popular with those generations as well. For instance, the 8-bit version of our hero can only move in four directions–up, down, right, and left. By contrast, the 16-bit form can move diagonally as well as those for directions. Switching between the two modes using a cryptical crystal skull will allow the player to solve puzzles and progress through the game. It’s an interesting, almost meta take on the nostalgia-dominated indie game community. High Strangeness is currently in development for PC, Mac, and Linux and is on Steam Greenlight.